Prenatal diagnosis is done to know about the status of disease in fetus before it is born. It is usually done to know about a genetic disorder or congenital malformation in the fetus. The basic objective is to provide an informed choice to the parents. If the fetus is healthy then the parents are reassured. When the fetus has a serious genetic abnormality or malformation then the parents have the choice to either terminate the pregnancy or to accept the child with genetic abnormality.

The invasive method of prenatal diagnosis involves fetal sampling by Chorionic Villus Sampling (CVS) or amniocentesis. The fetal sample may be tested for a large number of single gene disorders or chromosomal defects.

Thalassaemia major is a difficult and expensive disease to treat. The births of children with thalassaemia major can be prevented by early prenatal diagnosis and selective termination of the affected pregnancies.

The first step in prenatal diagnosis involves identification of the Beta thalassaemia mutation in the father and the mother. In the next step the fetal sample is taken and is tested for the parent’s mutations. It usually takes about a week to get the result. The error rate in prenatal diagnosis is around 0.5%.

Who needs prenatal diagnosis for thalassaemia?

What are the chances of error in prenatal diagnosis?

What are the limitations in prenatal diagnosis of thalassaemia?

Prenatal diagnosis of thalassaemia is possible in nearly all of the couples. Occasionally we may come across a couple in whom the disease causing mutation is not identified. In such couples the diagnosis can be done by linkage analysis or genomic sequencing. More commonly we come across a situation in which the previously affected child is wrongly labeled as thalassaemia. If CVS is done in such a couple then we are unable to complete the test because the request was wrongly initiated. It is therefore important that before requesting prenatal diagnosis for thalassaemia or any other disease the previously affected child’s illness must be correctly identified.

Can the CVS done at another place be sent to GRC for testing?

Yes the CVS can be done at any place and the sample can be sent to GRC for testing. The sample should be collected in sterile normal saline. It should be dispatched without unnecessary delay so that it reaches GRC within 24 hours of collection. The sample should be accompanied by request form clearly showing the indication and the blood samples of the parents.

What samples are required?

Is termination of pregnancy for genetic disorders permissible in Islam?

Most religious scholars in Pakistan, including Molana Taqi Usmani, agree that Islam permits termination of pregnancy for a serious gene 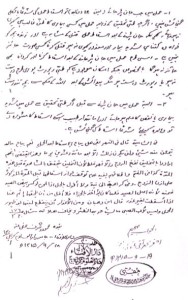 tic disorder in the fetus provided it is done before 120 days (17 weeks) of gestation. Prenatal diagnosis has become popular choice for the couples having children with genetic disorders who wish to have healthy children. However, financial constraints and lack of awareness about availability of prenatal diagnosis amongst the medical community and the affected parents are the two most common reasons for underutilization of prenatal diagnosis in Pakistan.